The SportsCrew | Fantasy Baseball 2B Rankings 2017
The Top 15 2B In Fantasy Baseball For The 2017 Season
Fantasy Baseball, MLB, Second Base
16969
post-template-default,single,single-post,postid-16969,single-format-standard,ajax_fade,page_not_loaded,,qode-theme-ver-9.5,wpb-js-composer js-comp-ver-4.12,vc_responsive

Its no secret that the Keystone position is absolutely stacked in 2017. This season is likely to end with the deepest field of second baseman that fantasy baseball has ever seen. Last time, we covered 30-16 rankings and many of those guys will make their way into fantasy lineups not only at the 2B position, but at MI and UTIL spots as well. Now, without further adieu, here are the top 15 second baseman for 2017.

15. Ben Zobrist (CHC) – Ill admit I was a huge critic of this signing by the Cubs last offseason. Throwing all that money at a 34 year old with a career .265 average and declining skillset didn’t make much sense to me, but that’s why I’m not GM of the defending World Series Champs. Zobrist, the World Series MVP, had his best post- Tampa Bay season reunited with Joe Maddon and carries eligibility all around the diamond into 2017. Don’t expect Zobrist to see as much playing time this year with the emergence of Baez and the Cubs crowded outfield, but his positional versatility and stacked lineup around him makes him a solid fantasy asset again at age 35 this season.

14. Dustin Pedroia (BOS) – Pedroia was able to stay healthy all season last year, and that led to his most productive fantasy season in 3 years. The Red Sox are going to score a ton of runs and Pedroia will be at the top of arguably the most potent lineup in baseball. He scored his most runs since 2009 last year (105), his highest HR & RBI totals since 2012 (15 & 74), and managed to lower his strikeout rate which contributed to his .318 batting average. Expect a similar season from Mariano Rivera’s favorite second baseman in 2017. Pedroia being the 14th best second basemen is another testament to how stacked this position truly is.

13. Jonathan Schoop (BAL) – J-Money was a sleeper for many people heading into 2016, and he delivered with 25 home runs, although the long season took its toll during the second half of the season. The first half, Schoop hit .304, but ended the season with a .267 average. He played in all 162 games and set career highs in every category, even though he hit 6th or lower in the lineup in 110 out of 162 games. I expect Schoop to improve in virtually every category this year, and would not be surprised if he works his way into the top 10 second baseman when 2017 is all said and done.

12. Ian Kinsler (DET) – Many people overlooked Kinsler going into last season, and deservedly so after declining numbers every year from 2012-2015. But Kinsler responded with his best season with the Tigers in 2016, hitting 28 HRs, scoring 117 runs, and hitting .288. Detroit’s leadoff man should see a similar season in 2017, and could potentially find himself on the trade block in July if (when) Detroit trails Cleveland by 10 games. If he upgrades to a more hitter friendly park, Kinsler could see a huge boost to his value down the stretch run and fantasy playoffs in 2017.

11.  Dee Gordon (MIA) – Dee little juicer that could really disappointed owners last season after he won the batting title in 2015 with a .333 average and 58 steals. He did manage to give us baseball’s most tear jerking moment in 2016, though, when the 98 pounder homered in his first at bat following Jose Fernandez’s untimely passing. Barring another suspension, Dee can definitely still be the 60 steal . 300 average player he was in 2015 again, so if that’s what you team needs and he is still on the board around 80 overall, draft him with confidence.

10. D.J. LeMahieu (COL) – This guy is a selfish coward bitch baby. He sat out the final weekend of the season in 2016 to preserve his .348 batting average & ultimately edged out Daniel Murphy by .001 to win the batting title. Flashback to 1941 when Ted Williams was sitting on a .39955 batting average going into the last day of the season, which would have rounded up to .400. Instead of being a selfish coward bitch baby, Ted Williams insisted on playing BOTH games of the double header on the final day of the season. Ted went 6 for 9 that day, to finish the season with a .406 average. The difference between Williams’ approach and bitch baby DJ’s approach is a microcosm of the steady decline of American masculinity. Anyone who drafts DJ is either a part of the problem, or they like the idea of a second baseman playing in Coors Field who will again hit .300 or better.

9. Jason Kipnis (CLE) – Kipnis resurrected his power stroke from the dead in 2016, hitting 23 bombs after just 6 & 9 in 2014 & 2015, respectively. He posted a career best 91 runs atop an Indians lineup that added some guy named Edwin. Assuming he can reach the 20 HR plateau again, his near .300 average should make for a very productive in 2017. Goofy stance and all, hes a lock for a top 10 finish as far as second baseman go.

8. Jean Segura (SEA) – After the Diamondbacks executed the worst trade (Shelby Miller) in the 21st century, many people laughed at Arizona when the traded for Segura last offseason. Ok Arizona you didn’t quite make up for Shelby Miller, but this trade was nonetheless a steal. Segura broke out hitting .319, stealing 33 bases, and scoring 102 runs. One red flag, though, is the fact that his BABIP last year was .353, by far his career best and that would be difficult for him to repeat. He will be atop a lineup that features names like Cano, Cruz, and Seager, so Segura is once again a solid play at second base (or shortstop) in 2017.

7. Rougned Odor (TEX) – In addition to winning over the hearts of non-Toronto fans around the world last year, Odor joined a pretty exclusive club in 2017. He is only the 6th player since the year 2000 to hit 30+ home runs at age 22 or younger. The other 5? Pujols, Trout, Stanton, Harper, Machado. As great at his age as he is, though, he certainly has his flaws – mainly his 135/19 K/BB ratio. Still only 23 years old, the ceiling couldn’t be higher and I wouldn’t be surprised if he was able to “knock out” another 30 HR this year. If he can manage to increase his average to .280 (.271 in 2016), he would easily pass 90 RBI, 90 runs, and will steal you 15-20 bases. Buy low in dynasty leagues this year and you will not be disappointed 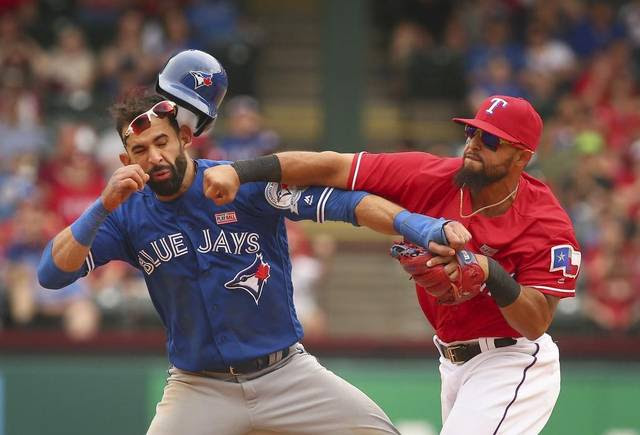 4. Daniel Murphy (WAS)-  Those of us (me) who thought Murphy’s 2015 postseason was a mirage couldn’t have been more wrong. The Nationals definitely could not have expected Murphy to hit .347, 25 HR, 104 RBI but its safe to say they will take it. If DJ bitch baby LeMahieu didn’t sit out the last weekend of the season to preserve his .348 average, Murphy would have won the batting title too. Now Im not expecting .347 out of Murphy again this year, but .320 along with his solid counting stats make him an elite play at second base AND first base in 2017.

3. Trea Turner (WAS) – Only Billy Hamilton had more steals than Turner post All Star break. He also somehow managed to hit 13 HR in 307 ABs to go with his .342 batting average. The sky is the limit for Turner, but as far as 2017 goes, 20 HR, 75 RBI, 100 runs, 45 SB, and .300 average are more likely than unlikely. By the way, hes in a lineup with Bryce Harper and Daniel Murphy. He is 100% worth the hype and honestly he is probably underrated in dynasty leagues. If Turner is your starting second baseman (or shortstop), he will NOT be the reason you finish in last place, again. YOU will.

2. Robinson Cano (SEA) – The only knock on Cano was his drop off in HR totals after leaving the Bronx, but his power came back with a vengeance in 2016 as he launched 39 in by far his best season in Seattle. He is 34 years old, but don’t let that deter you. He hardly ever gets hurt (156+ games played in each of the last 10 seasons) and his team added Jean Segura. There is no reason Cano won’t again hit 30+ HR, 100 RBI, 100 runs, and hover around .300. Arguably the GOAT in the modern era for fantasy baseball second baseman because of his consistency and the fact he plays a historically weak fantasy position, Cano will be the least of your worries if you find him on your roster in 2017.

1. Jose Altuve (HOU) – He should be 1, 2, 3, 4, and 5. Houston couldn’t have imagined in their wildest dreams when they singed that  5 foot 5 inch 16 year old from Venezuela that he would ever blossom into the best pound for pound player in Major League Baseball. How many players FLOOR is a .320 average, .380 OBP, 30 steals, 25 HR, 100 runs, 90 RBI, 200 hits, and 40 doubles – with the potential for league best in most categories? No one, and even in 2017 where second base is absolutely loaded, this guy is head and shoulders above (and below) everyone else. Heck, if you have some outfielders who you feel are under valued at their current ADP, draft Altuve #1 overall instead of that fishy Angels player who is too cool to play for team USA in the World Baseball Classic.

Thanks for reading. If you lose your fantasy baseball league because of your second baseman in 2017, you may as well retire because their may not be a more stacked position the rest of your life than the second base position is in 2017.