Posted at 04:10h in Fantasy Hockey, Hockey by Daniel Render 0 Comments
2 Likes
Share
It’s already been a pretty wild off season in the NHL with lots of big names changing teams. As we are in the dog days of summer, we might as well get prepped for the 2016-17 season and discuss the fantasy impacts of all these moves. I introduce to you Offseason Fantasy Quick Hits. I will be discussing the fantasy impact of all major moves made by all NHL teams over the course of the summer. Part twelve of the series previews the Florida Panthers for this upcoming season.

I’m going to have fun writing about my 2nd favorite team, especially now that they are in my opinion as a good as any other team in the Eastern conference. There are many attractive pieces on this team from a fantasy perspective. It will be interesting to see how the Panthers lines shake out this year, but I’m gonna assume there is not going to be much change from last year’s lines, especially in the Panthers top six. I’m going to break this thing down line by line.

The Huberdeau-Barkov-Jagr line was a thing of beauty last year. It was especially amazing to see a 43/44 year old Jagr post 66 points. Truly amazing. The guy is a shoo-in hall of famer, and one of my all-time favorites, but if you are like me, you’re not gonna draft him. Maybe 2016-2017 isn’t the year that father time catches up with Jagr, but maybe it is. Even if it isn’t, can you see Jagr topping his 66 points from a year ago? He had a 19% shooting percentage, 6% over his career average. Even if Jagr goes nuts again this year, I’m not expecting anything more than 60 points. Could he repeat? Yes, anything is possible. But unless he falls to me at a point where I feel like there are no longer any 60 point players (it would have to be very late in my draft) then I will let someone else draft him.

His linemates are a complete other story. Alex Barkov almost went a point per game last year, and was over the PPG mark in the second half of last season. He is also entering his fourth full professional season, a typical breakout year for many young players. Add to the fact that he was a 2nd overall pick and is still only 20 years (almost 21 years) old!! I’m buying on this guy. This guy can put up who knows how many points as early as this year. I certainly think he has the talent for 80. Maybe even more. I haven’t seen his ranking yet, but I think taking him anywhere in the 3rd round or later can’t be a bad pick.

Lets not forget about Jonathan Huberdeau. The guy just turned 23. He was also a 3rd overall pick and just completed his fourth full professional year. He hit a bit of a rough patch in his sophomore year, however he has greatly improved in his last two years. Like Barkov, he started a bit slow last year and finished strong. Don’t underestimate this guy’s talent. I don’t think he has as high a ceiling as Barkov, but think he could put up 70 points this year, maybe even 75 especially if Barkov is putting up 80+. He should be good for 65. I like this young duo in drafts this year. 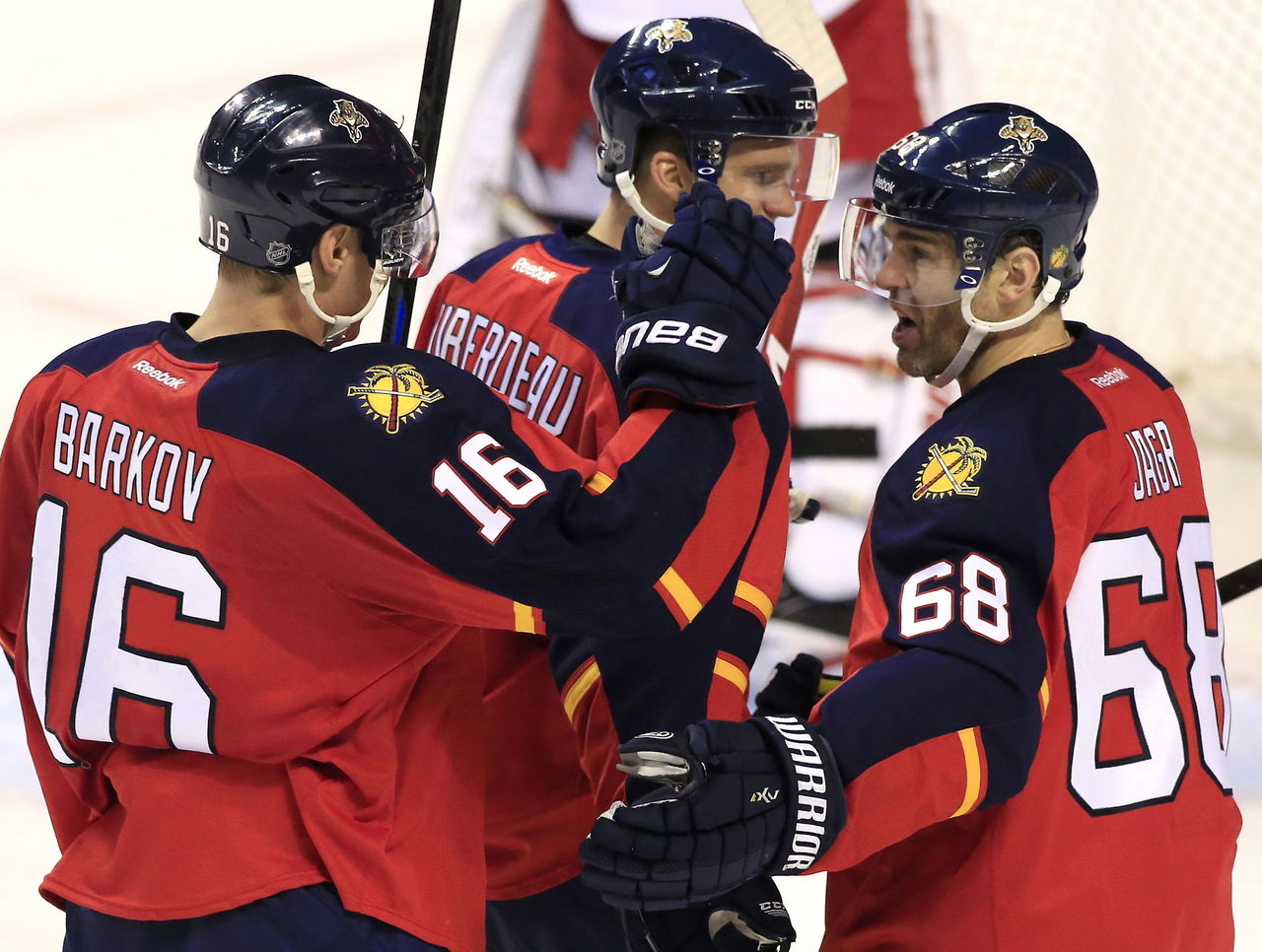 Expect more big things from the Huberdeau-Barkov-Jagr line this year.

The 2nd line of Jussi Jokinen-Vincent Trochek-Reilly Smith also hit a pretty big hot streak last year. I won’t talk about each one in as much depth as the last line, but I will say this. Jussi Jokinen has become a pretty reliable 60 point guy. While I probably won’t be drafting him (I don’t think his ceiling is high enough for me) he is certainly a viable late round pick. Not a huge fan of Reilly Smith either, as I don’t think he will ever top 55 points. Trochek is a bit more interesting and I do like him as a player. I would draft him as I think he could put up 60 or even 65 points, and could see a larger opportunity open up if injury ever struck.

Other than that, guys like Nick Bjugstad and Jared McCann are very talented players that are buried on the third line as of this writing. If they could move up I like both of their potential to put up points. Right now they are more watch list guys for me, although Bjugstad could be drafted as a late round flier.

Aaron Ekblad is a stud D, but you already know this. The guy has 27 goals in his first two NHL seasons. I think he can put up 20 goals and 50+ points this year.

The acquisition of Keith Yandle will help the Panthers powerplay out. Not sure if Yandle will be stealing PP minutes from Ekblad or playing along side him but there’s room for both of them to put up 50+ points. Yandle did just sign a massive contract which should assure him playing time, but let’s not kid ourselves, this is Ekblad’s team, and Yandle may take some time to acclimate to his new surroundings. I like both defensemen and don’t think you are making a bad pick taking either of them.

One last thing to note – Roberto Luongo begins the season recovering from hip surgery and James Reimer just signed for 5 years and over $15 million dollars there. Luongo’s stock takes a big hit this year, even if he fully recovers from the surgery. Reimer will be seeing at least 25 games with the contract he has, and could even steal away more starts with strong play. This isn’t the first time Luongo is in a 1A/1B goalie situation (remember Schneider!?), but this is his first time as a Panther in a 1A/1B. I’m probably avoiding both goalies this year, unless I own both.

Lastly, not much in the way of prospects making a fantasy impact this year. A lot of people are high on defenseman Michael Matheson, but in one-year leagues I doub’t there is any relevance. Even in keeper leagues I think he is a bit of a long-term project.